Day one: learning the ropes

I can’t believe it was just yesterday we set sail from Roskilde. The preparation started the day before. We all met at the Viking Ship Museum at 6pm and started packing provisions, food, water, blankets and had a number of meetings about the journey. Then we all slept in a tepee and rose the next morning at 7am for a quick breakfast, and then to pack the ship. Everything is stored below deck, each person has a baggage allowance of just 80 litres for the entire trip, this may sound like a lot but this includes sleeping mats, sleeping bags and heavy duty rain gear, plus boots and then clothes. 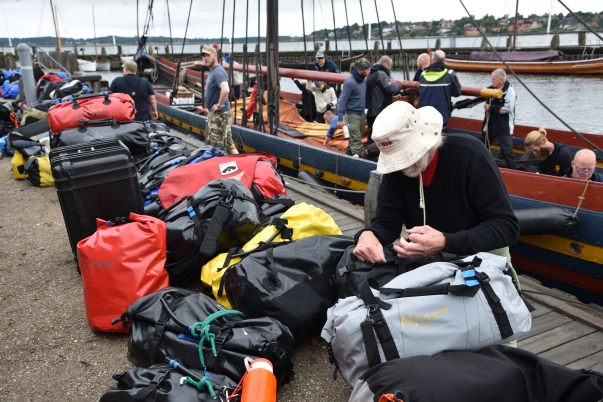 Some people are travelling for one week at a time others, like me for the entire voyage which is three weeks in total. The good thing is that we generally wear a limited selection of clothes, we get to shower or swim every second or third day. So, if you begin to smell a little, it’s alright as the chance are your fellow crew members smell equally as bad! However, sailing out in the open the body odour smells tend to go unnoticed. It is in the evenings when the tepees are erected and the shoes and socks come off and the snoring starts living in close proximity with sixty or so other people becomes more apparent!

The mid ship crew attaching the sail to the yard at the harbour in Roskilde.
So, we left Roskilde, bang on time with a quay full of the public there to wave us off and wish us, “ “god tur” or “good trip”.  We had been prepared by Søren our skipper that the winds were coming form the west and we may not get out of Roskilde Fjord unless we spent the following 8 hours or so rowing. That’s hard work with a ship of this size. Approximately half the crew row at one time, then we alternate. We are divided by the side of the ship we are positioned in, starboard for the right side and port for the left. 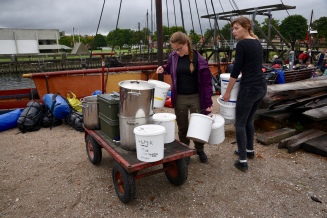 The kitchen or “kabysen” supplies are carefully organised and stored below deck.
Our shifts last for precisely 4 hours, then we switch. But when we row, we change every thirty minutes which is a good work out! It turned out we only had to row for about 2 hours then we finally set sail, which is when the adrenaline and butterflies in your stomach starts racing. The sail is spectacular when raised and initially looks and sounds like a wild animal billowing and flapping in the wind with ropes attached and pulled at each corner for control. When it’s up you can see how strong the wind actually is, and then it takes you where it wants you to go,  you can also manipulate it with various manoeuvres. 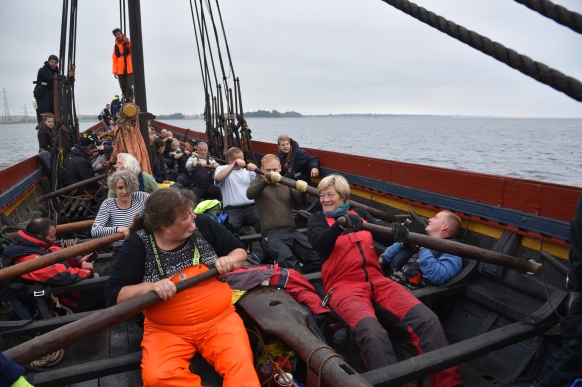 Last year I sailed with the Sea Stallion for 2 weeks to Sweden. That was my first ever sailing experience. Now I am living in Denmark, learning the language and sailing a huge Viking ship with a crew a lovely Danes who are all so happy to help me learn the language and show me the ropes, literally. There are so many ropes on this boat!

The thirty meter long ship is divided into three rooms, each with its own team, each member has their own individual task. There is the foreship at the front, mid ship in the center and aft at the back. Last summer I sailed in the midship and since I am sailing this time for three whole weeks I am going to spend a week sailing in each of the rooms, thus gaining a complete overview of the whole ship.
Yesterday evening we moored the ship at a very special place, Skuldelev. This is where the boat the Sea Stallion is based on was originally discovered. Along with 5 other Viking ships in 1962. There is more information about this discovery which enabled the full reconstruction of many versions of Viking ships on the Viking Ship website: http://www.vikingeskibsmuseet.dk/en/visit-the-museum/living-museum/the-viking-ship-hall/
So, it was particularly poetic to return to the place of the ship’s ancient ancestor. These boats were designed a a thousand years ago and they are still perfect, with no need for modern intervention. We ended the evening with a delicious meal, which we cooked on board and then a refreshing dip in the harbour waters. Then to bed in our tepees for a well deserved sleep after all that rowing, sailing and fresh sea air.

One thought on “Day one: learning the ropes”

This is a text widget. The Text Widget allows you to add text or HTML to your sidebar. You can use a text widget to display text, links, images, HTML, or a combination of these. Edit them in the Widget section of the Customizer.
%d bloggers like this: